No Easy Day: The Firsthand Account of the Mission that Killed Osama Bin Laden 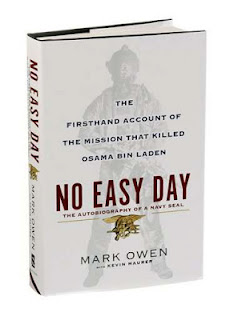 There have been a lot of rumors about what actually happened on May 2, 2011, the day Osama Bin Laden was killed in Pakistan. I am one of the biggest skeptics over that report mostly because of the stories that were leaking out that sounded so bogus (like how he used a wife as a shield in a serious bloody gun fight with the navy seals.) Once I heard that a former Navy SEAL who was actually in that mission wrote a book on what happened that day, I was anxious to read it.

Because this whole ordeal is so confidential, it's difficult to wade through the rumors of Bin Laden’s declining health since 1998, being in possession of his body, and dumping it in the Arabian Sea. An autopsy (if one was even done), was not done well before they dumped the body. Any pictures of the body are not being released to the public. We know for a fact that the seals did invade the compound in Pakistan, another fact is they killed all the men living there and drug one off that they claimed was Bin Laden.  Because there is no solid proof that they actually shot Bin Laden and because everyone involved in the mission prefers to not identify themselves, anybody can say anything they want about it. That is why I am viewing this book as just another story from a bad writer.

No Easy Day, by Mark Owen is a Navy SEAL's firsthand account at being present when his team besieged Osama Bin Laden’s compound in Pakistan and killed this famous terrorist. The author leaves a note at the beginning of the book claiming that he has changed the names of all of the people involved in this mission to protect them. He claimed he even masked his own identity in this story. He said that he went to see a military attorney to make sure that his book wouldn't comprise any special artillery, tactics and ongoing missions that would reveal any information to the unseen enemy. Owen’s personal account of the mission contradicts the above-mentioned rumors by saying that Bin Laden did not put up a fight, he was unarmed and he stuck his head out of his bedroom and one of the SEALs shot him in the head.

This book was an easy read. I blew through its 300 pages in short time. You can tell the author is not a professional writer. The protagonist is an Alaskan redneck that was raised with a gun, and to his parents' chagrin has always dreamed of joining the military. His rise in training and military politics in becoming a special team in the navy SEALs gets repetitive and boring in some spots. His character seemed almost the typical male-Hollywood-action-cardboard-cut-out hero that most men have when writing.

If you’re big into books about military this might be for you. He even listed some charities at the end of the book that you can donate to the poor starving retired navy SEALs…of which he is one.
Posted by Kirk Baxter at 9:46 PM