Is being politically correct racist? 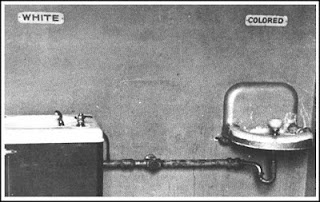 Prior to 1966, anybody who wasn't a Caucasian male usually got the least of (if any) benefits in employment, education and other societal perks. There was something called the Jim Crow era, when America was so strict on race and avoiding integration that they had to make bathrooms for the white people and bathrooms for the black people and the same thing with water fountains etc. Then, President Johnson passed a law encouraging affirmative action and equal employment opportunities to all of the neglected races and classes that were looked upon by society as being lower.
I did an entire paper in college on affirmative action and how it was good back in 1966, but now the pendulum has swung so far in the opposite direction that society is still using race to determine who gets the job and who gets shafted. I found that racism is still alive and well in Utah. Not so much with black people but primarily with Hispanics.
Over the past five years, I got to attend a company Christmas party, (oh, I’m sorry... a “nondenominational holiday” party) that always had a drawing at the end of the evening. The first two years, I observed that they just had one basket from which to draw employees' names to see who would win the raffle for prizes both big and small. The third year, they surprisingly had two baskets and two each of every prize. One basket was for all of the Hispanic, native Spanish-speaking employees, who worked in the warehouse and one was for everyone else, mainly white English-speaking office employees. When I inquired about this observation with one of the employees, he said it was because the CEO and the rest of the upper administration received complaints from the past two years that too many prizes were being given to the Hispanic employees. The party has diminished into pretty much nothing now for the following years. Why does this sound like Jim Crow to me? Everyone everywhere is so scared about making sure to be politically correct to avoid issues like racism, only to perpetuate racism into a different form. Do you think being politically correct with affirmative action could be considered racist?
Posted by Kirk Baxter at 10:01 PM