The Haunted Legend of Kiwanis Park

Another segment I am starting on this blog is my research and travel log on busting urban myths and legends in Utah.
My first one for you today, my beloved readers,  is the myth of Kiwanis Park.
Last summer my wife had a goal to stay in shape by going on a hike at least once a week. She always tried to find people to hike with and she would usually get her younger siblings to accompany her. The first obstacle is getting them to commit to a hike. The second obstacle she faced was getting them to commit to where they were going to hike. My wife, Laura, wanted to hike up to a beautiful waterfall in a Pleasant Grove canyon. Her little brother said “I’m not going with you! It’s already dusk and that hike goes through Kiwanis Park and I refuse to go there after dark.” Laura asked “Why is that?” “Because of the skin-walkers that roam around there.”
She was still able to get them to go with her and they took a few pictures. The idea of Pleasant Grove being haunted with something called skin-walkers fascinated me. I had to visit that place the next day and do some investigating.
There was a monument at the park called Battle Creek to remember the fallen in the first Native American and white settler battle in Utah County.
(Side note: Pleasant Grove was originally called Battle Creek.) When the Mormon settlers first came into the valley there was a rumor that spread around the Salt Lake Valley how a band of savage Indians had stolen some horses from Brigham Young’s property. A posse was formed to hunt down the accused.There was a rumor that a messanger tried to send word to the posse that the horses had been returned so it is uncertain why a battle took place. The Mormon settlers killed all the male warriors of this accused tribe and brought all of their women and children back to live in the Salt Lake Valley. Most of these accounts are not valid sources and so we really don’t know why this Mormon posse persisted in this slaughter. Brigham Young always tried to go out of his way to make peace with the Native Americans and encouraged his people to do likewise. He always said, “it’s easier to feed them than fight them.” That still didn’t stop the individual bloody fights among some settlers and other groups of Native Americans.
I welcome any other history buff to correct me on this research if it appears to be inaccurate.
Now that I knew the history behind Kiwanis park I researched skin-walkers. The definition I found was this: In some Native Americans legends, a skin-walker is a person with the supernatural ability to turn into any animal he or she desires, though they first must be wearing a pelt of the animal, to be able to transform. Similar lore can be found in cultures throughout the world and is often referred to as shape-shifting by anthropologists.

With further investigation I found the actual haunted myth behind the park on  the Haunted Utah website  http://www.utahghost.org/Main%20Files/haunted_utah.html

It states:
“Pleasant grove - Kiwanis Park:
Years ago there was a battle between Indians and pioneers. There is a memorial there for all the lives that were lost. Many things happen there. If you go up at night, some have said that they see shadow's running around them. A few accounts say that there is a arch way of tree's that are almost like a spiritual pathway. people that have walked thru the pathway say that instantly they hear screams and smell horrible horrible smell's.”
After hearing about my wife and siblings' adventure and how they took pictures of the hike I took the photos and “improved” some of them by simply picking some with just them in it and then with the help of my six hundred dollar software called Photoshop I added some ghost-like apparitions in the background and then burned them a cd with all the photos and gave it to them. Their reaction was first shock, which lead to skepticism. Since they know me and my crazy nature they knew the photos were a hoax. I added them to this blog for your own personal enjoyment. 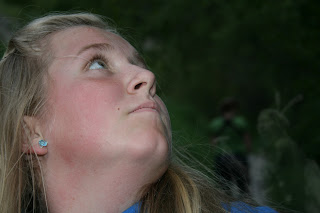 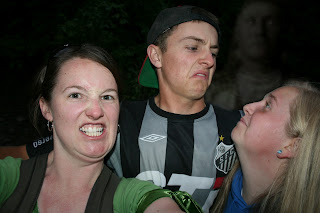 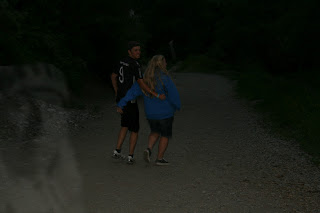 Have you ever been to Kiwanis Park? Was it spooky? Please I highly encourage fellow myth sleuths to post their experiences on here as well.