Hello everyone, I have come back from a year and a half spectacle.

Blogging is a new hobby for me. I kind of started one about a year ago but I neglected it. Now that I have the time to start it again I have to admit the fact that I am a novice to blogging. So I heard some advice from an expert and that is when you blog on the internet you have to write about something that grasps your readers' attention. He said a surefire topic that always gets viewers is to blog about cats doing stuff. 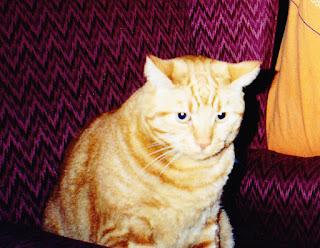 Face it, of the top three things that internet surfers look for on the web, number two would be cats doing stuff. So here you are: cats doing stuff:
I just graduated from Utah Valley University in Digital Media and for my Senior Project I got to assist in helping redesign the South Utah Valley Animal Shelter (SUVAS ) website. A girl in my group thought of the idea because she loves cats. I joked about how when we showcase this project I could bring in a cat trap. She didn’t think that was very funny. 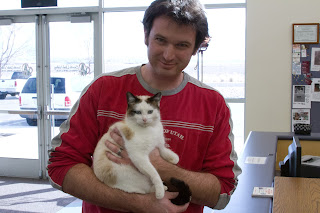 Part of my project was to help produce a welcome video for the new site. My crew wanted to get a shot of a customer being assisted by a shelter staff member at the desk. They wanted the customer to be holding an animal. Because I was the manager and like to stay on task and I noticed that our time was dragging on, I went up to a random cage grabbed a cat and said, "I’m ready." Someone in my group asked, "Isn’t your wife allergic to cats?" I said, "Yup but I don’t care anymore." We got in about five takes before the cat’s clawing into me became nonstop and deeper. 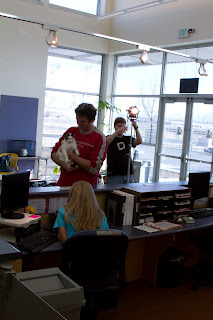 A shelter employee showed me his scars from past cat claw gouges and told me that he thought cats were more dangerous then dogs to bring in off the streets because they fight dirty.
The anticlimactic part of this story is that once we officially turned the revised website over to the shelter the lady in charge of maintaining the site removed the video (probably because she was the main feature of the video and probably didn’t want it viewed by the populace). You can still see the revised website that my skilled designers made at SUVAS.org.

Special thanks to Kyle Siemer for allowing me to use his shots from the SUVAS film shoot.

Do you think cats are one of the three most searched items on the internet?
Posted by Kirk Baxter at 9:10 PM