Alternative Fuels: Is there a Solution? Chapter 6, Researching Hydrogen Fuel

Hydrogen is believed by some to be the best alternative fuel and is undoubtedly the best that will be available for future use. Aside from being abundant and inexpensive, hydrogen is also clean, efficient, and renewable. Some people hope that hydrogen will be the replacement for all other fuels that are used today.

You can surf the web and find multiple bogus inventors that claim they have an inexpensive hydrogen fuel cell kit for your car that you can easily install yourself and save money on gas by raising your miles per gallon (MPG) on the water-based fuel source, which should act as a hybrid for your internal combustion engine. In layman’s terms, you buy their kit (which usually consists of: mini hydrogen generator (a funky mason jar), wiring harness, tubing, and accessories to hook it all up) and some sort of an easy do-it-yourself installation video. This can all be shipped to your house for 100 bucks. You attach it to the plenum, or the vacuum section of your manifold, and then you can have hydrogen pumped into your combustion chamber, which allows a secondary fuel source that sustains your combustion engine much longer before it needs another fill up at a gas station.

One of my professors at UVU experimented with one of these kits when he drove his motor home from Orem, Utah to Anchorage, Alaska and back. He claimed that he observed no substantial change in his MPG.

My undergraduate research team performed multiple experiments in hydrogen production through electrolysis using ammonia and water as a fuel source. 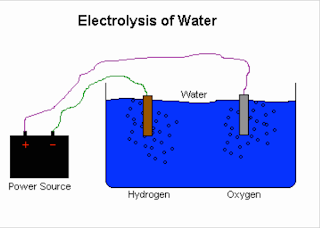 We ran tests with water in a bubbler with precious metals from a catalytic converter to hopefully create enough hydrogen to power a small and simple fan. We would monitor any spikes in electricity. We did the same with using ammonia instead of water.

Unfortunately, we never brought the fan to life but we did see a slight increase in the power when we used ammonia.

Although GM and Nissan are introducing a new franchise of hydrogen-powered cars in 2015, I don’t think it will be financially beneficial to any consumer who buys one. I am predicting it will be another flex fuel fiasco.

Here we have another alternative fuel option that although is healthier for the environment, it is not very cost effective for the buyer.

Do you remember the Hindenburg disaster? With that in mind, does that frighten you to never consider hydrogen as an alternative fuel?
Posted by Kirk Baxter at 12:21 PM