Pediophobia, or fear of Dolls

Pediophobia, or fear of dolls, is relatively common. It is believed to be the fear of humanoid figures, or things that look like they have a soul. Some people are afraid of all dolls and stuffed toys, while others fear only a specific type. Dolls that talk or move, made of porcelain, old-fashioned china dolls, or old mangled ones are especially common targets of fear.


Pediophobia is what I believe my family has. Earlier this year my mother was babysitting my daughter while Laura and I were at work. My mother shows love by always having to give things to us. This time she gave my daughter an old Sleepy Time Ernie (Sesame Street) doll. 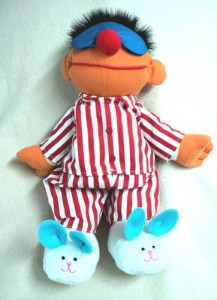 This doll was an old toy I believe one of my siblings received when they were little for Christmas or a birthday or something like that.  It is animated in a way that it interacts with you. If you sit him up he says the automated phrase in Ernie’s voice, “I feel great!” if you squeeze his left hand he then says, “I am sooo sleepy, I need a nap.” He then sings himself a lullaby and begins his sleep mode, which is snoring noises and a rising and falling chest. Cute huh? Why would this be creepy?


Well, the fact that you can’t turn him off and so if you move him at all he will say, “I feel great!” is kind of creepy especially when he says this when no one is in the room.  I promised Laura I would get rid of him by giving him to my brother on his birthday. I forgot. The fact that this doll talks to you without command or coercion in that automated soulless voice can really startle a person. I was just waiting for it to be in our room someday watching us or having it say something else random like. “I am going to wait until you are sleep so I can strangle you” or “I have a shiv.” Something like that.


Just tonight Laura and I were in the other room working when we heard Ernie spout off again non-stop. No one was in the room with him and no one had touched him for several weeks.


I grabbed the possessed doll shoved it into a DI bag and made a swift delivery to the Provo DI store. So if anyone is looking for a slightly possessed demonic toy doll you are welcome to buy him.

Another situation like this occured seven years ago: I really love Halloween and I love to collect decorations for the season. I once had an automated laughing skull which had glowing red eyes that would look around the room and it would laugh maniacally. When Laura and I were first married, I decorated our apartment with all of my spooky decor and I would make sure to turn everything off--including this skull--every time we went to bed. One night at 3 am, I heard that spooky laughter coming from our living room! A. I had turned the thing off, and B. that skull is motion activated...so what set it off?! Needless to say, that skull also found its way to DI the next morning.


I don't think I have a serious and chronic case of Pediophobia, only with an animated object that has a mind of its own. What is your opinion on this subject?

Email ThisBlogThis!Share to TwitterShare to FacebookShare to Pinterest
Labels: The Inexplicable