Overall experience at Night of the Running Dead

I love running but have never signed up for an official race before. So, when I first heard about this I thought this would be the coolest thing ever, being hunted by zombies in a 5k race. Then I read their terms and conditions - waiver of liability and rules of the race, which summarized is: no props, no contact at all with other runners, don’t touch them, or taunt them, if you catch up to them you can pass them but that’s it. And then I said, “That’s totally lame.” After wrestling with indecision I decided to sign up anyway despite how lame this actually sounded.


My overall experience with night of the running dead was this: I signed up as a human not a zombie, so I just wore my regular running attire. All runners were corralled to the starting line where we had to watch an intro movie about zombies at 8:50 pm. They then shot fireworks off and I was confused and asked a runner next to me if that was the starting signal. They said no. At 9:00 pm they started the race by someone just saying go through a bull horn. According to the program they were supposed to start the zombie runners at 9:02 pm but that didn’t look like that happened.


They 5k race in Sandy Utah went through a trailer park, (I noticed that many trailer park patrons were watching us) down the Frontage Road and around the Sandy South Towne  Mall.


According to this link to the overall results for the race: http://strideracing.com/2012/october/2012_zombie5k_overall.htm


I was the 29th runner out 137 participants to cross the finish line. My time recorded was 24.49.6 a little under 25 minutes which calculates to be around 8 minutes a mile. Because I didn’t pay the extra money to get “chipped” and monitored I didn’t qualify for any awards and my spot on the list says Unknown male participant. 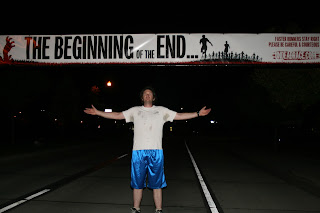 Since this was my first official race I set some personal goals:


Mission accomplished. Would you try to run this race if the rules were different and they said you could touch or taunt other runners?


Stay tuned: next blog post is titled How to Play the Game in a Zombie Race. Now that I know how they handle things I will share with you what you can get away with.
Posted by Kirk Baxter at 9:12 PM